It shouldn't come as a huge surprise that my weekday eating is not all that glamorous. However yesterday's dinner turned out to be much better than the planned yogurt+granola+carrot+hummus+other carb-dinner, because my Dad took me out to dinner! As I was dragging my self to my third consecutive hour-and-half lecture at 2:30 I checked my messages and there was one from my Dad saying he was in the general vicinity for a meeting and wanted to know if I needed groceries and/or dinner. UMM. . .YES! And more than that I was in desperate need of family. Safe to say my day was instantly made and my frown turned upside down.

We went to Frita Batidos, a new Ann Arbor restaurant owned by Eve Aronoff. Eve also owns Eve in Kerrytown and was on Top Chef Season 6. I had heard from a friend it was good, but WOW - it was GOOD. My Dad and I both had the Pulled Pork sandwich and split the Shoestring Fries. In addition I had a chocolate Batido; a batido is a "tropical milkshake made with fresh fruit, crushed ice and a drop of sweetened milk with or without rum*." Mine obviously without. Everything was great, the restaurant itself is very minimalist - all white. There are five or six long white picnic tables to sit at, but I actually really like the community feel that those evoke. So now that I have talked that up so much, I would hate to show you the sub-par pictures I took (blame it on first time Frita excitement), but I'll definitely be back and maybe taking more blog worthy food pictures soon.

. . .and then I had to eat something tonight.

*From Frita Batidos Philosophy.
Posted by Munching in the Mitten at 8:11 PM

Frosting for the Cause 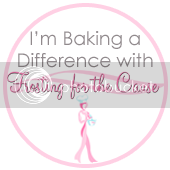